Excerpt from the Introduction

“Sometimes your only available mode of transportation is a leap of faith.”

As I stepped off the plane in Yellowknife (Jan 30th 2014), I was greeted with a more favourable temperature than I expected. The landscape looked pretty much like what I’d envisioned. Although it was my first time in Yellowknife, I’d spent plenty of time in the mountains and muskegs of northern Alberta, BC, and the Yukon.


-20c was actually a slight touch warmer than the seasonal norm for late January in The Northwest Territories. I was already acclimatized to the cold after spending November, December, and part of January hauling crude oil in Peace River and the Red Earth Creek areas of northern Alberta. The temperatures hovered between -20 to -40 for most of the month except for a few erratic warm spells of rain and freezing rain.

There were a few quick spikes in temperature that only lasted long enough to give the roads a thick coating of ice before plummeting into a deep freeze once again.

The freezing rain never stood a chance of melting which made for less than favourable driving for most of December. My run had me travelling over 800 kms/day on icy roads, 7 days a week for 3 week rotations. It makes me wonder how people can complain about a short drive through snow and ice on the way to work.

As far as cold weather goes, it seems to be much more bearable in the dry regions of the northwest. The dampness in coastal areas has a different effect on the body. (Like it soaks through to your bones.) I’d take -20 out west before -10 in Halifax any day of the week. Hauling crude oil was still a decent paying stint though ($400 to $500/day on average). The downside was the long hours, same roads, and the lack of challenging terrain made it boring.

It was oilfield production work which never seems to stop. I even worked through Christmas with no break. The fracturing side of the oil and gas industry also pays well, but the work is sporadic. I only took on this short term job for the experience and because it was on my “Truck-it list”. I was still on the fence about my decision to run the “Ice Roads” for the upcoming season, but after driving on icy roads for the month I figured why the heck not?

On the plane from Calgary through to Yellowknife, I was fortunate enough to sit beside a “returning” Ice Road Trucker from Ontario. We had a great conversation about his previous experiences and it made for a good flight. (Notice how I put the word “returning” in quotations). Out of the roughly 140 drivers for the company I was working for, approximately 70% were new drivers. (This was according to reputable company sources.)

I think most of you will have a good idea of why there’s such a high turnover rate after reading this book. I’ll also make it a point to highlight these reasons as the story goes on.

Of all the ice road companies combined, there was a total of 515 ice road drivers for the 2014 season. Out of these drivers hauling either mixed freight or fuel, the majority of them were fuel haulers. There were also many highway only trucks that delivered to Yellowknife where the freight was staged. These loads come in long before the ice road season starts and continue right to the end.

In all, there’d be over 7,000 loads delivered to the mines for the season. You could break this down to be around 14 loads for each driver, but some drivers did one run and quit, while others did 20 to 30. 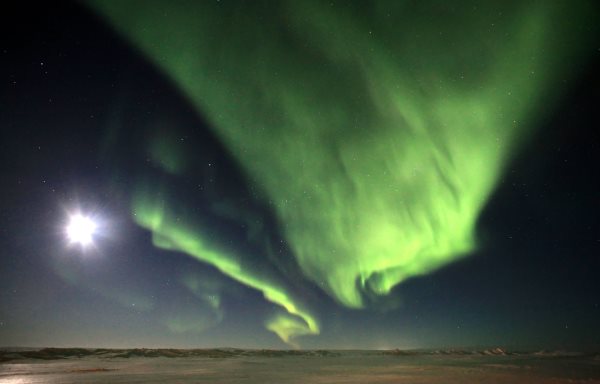 People come from all over the world to brave the cold and to experience the Northern Lights. This is one of the most spectacular visual displays of nature that one can see. A picture just can’t serve enough justice to the real life experience. I could only compare it to being at a concert of your favourite band as opposed to listening to a CD. The sound may be nice, but the atmosphere of being there makes all the difference in the world.

Off road trucking in the oil and gas industry can be fun, challenging, and financially rewarding. This section of our Oilfield trucking series is END_OF_DOCUMENT_TOKEN_TO_BE_REPLACED