Welcome to Ice Road Trucking e-book preview 9 where we take a look at cutting your losses from problems that cost you time and money.

After finally crossing Waite Lake we made our way through Portage 15 and onto another small lake. Our fearless leader informed us over the VHF radio we were going to stop at a pullout on Portage 16. I’d just finished making some more quick calculations on our progress.

It was just after midnight, we were around five hours into our drive from Nuna dispatch and had traveled about 120 km. The sad part was we had only covered about 45 km on the ice road itself.


After squeezing the three trucks into the small pullout we all jumped out for a quick chat. I couldn’t help but notice the star filled beautiful night sky even with the -30 temperatures. As we walked up to each other it was like there was a conversation that took place even before we actually started to speak. 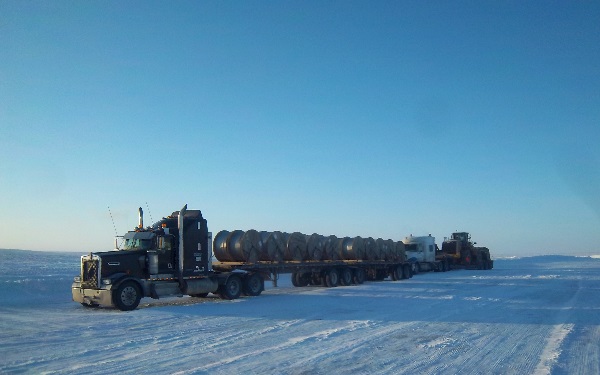 Lee had a look on his face with a half cracked grin that asked, “What do you think of this gong show so far?” Tony the logger responded with the shaking of his head, “Where the hell do they get these drivers from?”

My facial expression acknowledged the other two and threw in a sarcastic, “This is ice road trucking?” I was having one of those moments where my positive attitude was struggling with frustration. The sad part was, this was only our first trip and the rookie problems would last a few weeks.

Lee was a very laid back and easy going guy like most people are from the east coast of Canada. He was a Newfie. (Newfoundlander for those of you not familiar with the term). He’d spent most of his working life in the north and now lived in the Northwest Territories in a place called Hay River. After ten seasons of running the ice roads, he knew what he was doing out here.

We had a decision to make based on how tired we were, as opposed to how much progress we were making. Is it really worth it to keep going? If you weren’t tired and couldn’t sleep, you’d probably suck it up and keep going. Given that it was now just after midnight and it was a very long day, we could use the sleep anyway.

With the spin out issues we figured we’d be far better off grabbing a few hours sleep and making the best out of a poor situation. We were all on the same page for this plan, so we called it an early night. The positive attitude won this round and we went back to our trucks to prepare for Round Two. The plan was to sleep until 4 am and hopefully there would be clear sailing with the roads being a little quieter.

It may sound a little crazy for anyone not familiar with trucking, but midnight IS an early night for many a driver no matter how early you started. I laid my head down on the pillow and I was already wondering if I’d make it through the season. Before I drifted off, I had to think about all the reasons why I started Ice Road Trucking in the first place.

Off road trucking in the oil and gas industry can be fun, challenging, and financially rewarding. This section of our Oilfield trucking series is END_OF_DOCUMENT_TOKEN_TO_BE_REPLACED