Have you noticed far less people are dimming high beams and driving lights these days? Do you remember when there was more courtesy on the roads? How about when lights weren’t as intense as they are today, or when every other vehicle didn’t leave driving lights on permanently?


I don’t consider myself old, but I’m old enough. My first car had a dimmer button on the floor. (This should give you a ballpark figure of my age.) I remember a time when these things were not quite as much of an issue as they are today. Dimming high beams and driving lights is becoming a problem for both safety, and sanity.

Dimming high beams and driving lights is one of the most important things you should do as a road user, but courtesy and consideration appear to be things of the past. Gone are the days when drivers dimmed their lights at a reasonable distance, or even before they saw you. Most drivers reacted once catching the glow of oncoming lights around a bend or over a hill, but this consideration is disappearing.

Where I really notice the change is how many truck drivers are forgetting their high beams in recent years. I was used to cars not doing this, but not professional drivers. I know we can all forget, but the frequency seems to be increasing. I wonder if part of the reason is due to the practice of putting black tape over the blue light in the dash?

Yes, I was shocked myself the first time I heard of this. I first saw this when working for a company where slip seating was common. I had no problem ripping off the black tape. This practice should be illegal. It makes me wonder how many drivers do this? They claim the little blue light in the dash bothers them. My response, “Get a day job then”.

I put myself out of my comfort zone to adjust the steering wheel so it doesn’t block the little blue light. 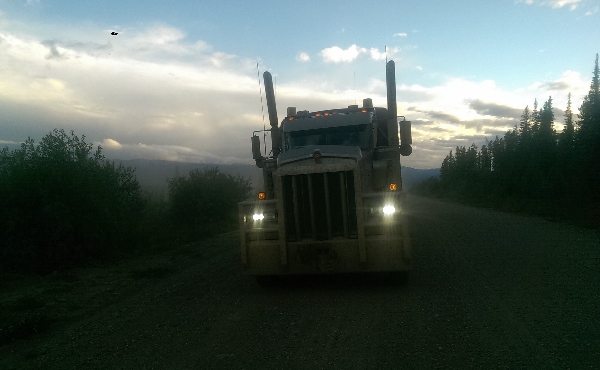 Dimming high beams and driving lights is a serious issue in the oil and gas industry when off road trucking on narrow and dangerous roads.

To make matters worse, the intensity of newer lights like Xenon HID (High intensity discharge), are 2 to 3 times brighter than conventional incandescent lights. It can be hard to distinguish whether a driver is using high beams or regular beams. They’re very intense making it difficult to see the road.

These lights are considered an improvement in technology, but sometimes there’s a price to pay. In this case, it’s paid by the oncoming traffic. Every increase in your vision can be translated into a decrease in theirs. The HID light is being installed on most trucks in the oil and gas industry and becoming a problem. Recently, some drivers have been removing them as a courtesy to others knowing how intense they are.

The lights have another issue. They don’t create enough heat to melt snow and can be covered quickly. The positive side of these lights is they’ll stay clean much longer when roads are wet with dirt and road grime. With less heat, they are less likely to “bake” the dirt and grime on the lens. We tested this theory a few times on the oilfield highway 40 south of Grande Cache in northern Alberta this winter.

Many experienced and courteous drivers will dim high beam lights well before physically seeing the oncoming traffic. They use the “glow” of the oncoming lights to determine when to dim their own lights. They’re aware of the effects of the initial high beam “Flash” which can be very intense. It would be a wonderful thing if everyone exercised this same courtesy.

We don’t just represent ourselves behind the wheel. Our level of consideration to others on the road reflects back to our companies, fellow drivers, as well as the image of all truckers to the general public. While we may feel pretty independent in our seat, we’re essentially a giant billboard to everyone else.

High beams, improperly adjustment headlights, and bright driving lights, may be preventing oncoming traffic from seeing the center line on the road. Blinding someone could cause your own death or someone else’s.

We also know that our eyes are drawn to lights and our steering often follows our eyes. Some of the newer blue lights tend to draw our eyes more. Safe driver training teaches us to not focus on the lights, but rather the outer yellow line on the right side of the road. This defense is more easily said than done.

Glare is simply a reduction in visibility due to the presence of a bright light.

We tried to keep this article fairly simple. I could have written dozens of pages on the scientific studies, and research done on glare. Anyone with a strong interest in this subject can do their own web search. I enjoyed reading the interesting and very educational articles in my searches.

I’m sure most older drivers find the newer lights are harder on their eyes. Studies show glare resistance decreases, and glare recovery time increase with these newer lights. The findings also show the older you are, the worse the effects.

Glare resistance – is your ability to still see the road or obstructions when looking at a bright light like the sun, or headlights at night.

Glare recovery – is the speed in which your vision returns to normal after such an exposure ends. 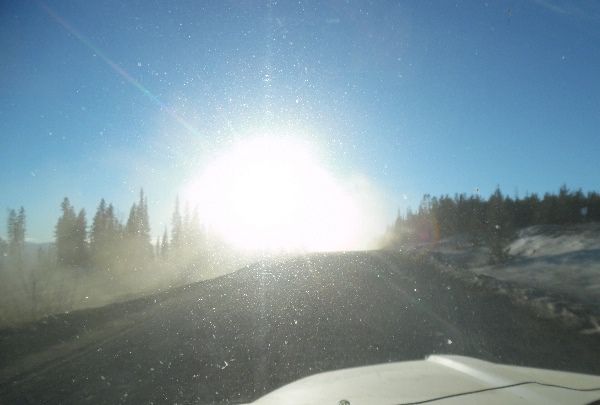 For purposes of vision, contrast is explained by objects being differentiated by a combination of color and light. Contrast is evident with poorly marked, or badly faded road markings.Think of how effective a high visibility orange safety vest is. It utilizes color and light with reflecting bands for a strong contrast.

How we use our lights affects the ability of oncoming traffic to see low contrast hazards. A pedestrian in dark clothes is a great example of a low contrast hazard. The scattering of light particles reduces your vision by creating a reduction in contrast. If you don’t believe this, turn on your high beams in heavy fog.

There are many different factors that affect light. This is why some lights can bother you more than others. It’s not always the light itself that’s the problem, rather than other factors that may influence the situation.

Rain, fog, snow, dirt, grime, and even windshield imperfections can all scatter light particles. The same is true for your sealed beams or headlight covers. These things can affect the abilities of your lights, as well as oncoming lights.

Off road trucking in the oil and gas industry can be fun, challenging, and financially rewarding. This section of our Oilfield trucking series is END_OF_DOCUMENT_TOKEN_TO_BE_REPLACED