I was never personally bothered by the practice of drug and alcohol testing in the workplace. I don’t use drugs and I rarely drink. I work in the oil and gas industry, so it’s a standard part of our industry just like a first aid course. I have nothing to hide, but there’s a little more to it than that.


Drug and Alcohol testing has always been a touchy subject. Safety is vital in the workplace, but just because someone has a right to do something, it doesn’t give them the right to violate your rights. We’re going to look at a couple of areas of concern with the Drug and Alcohol testing program that could easily be addressed making it better for both sides. 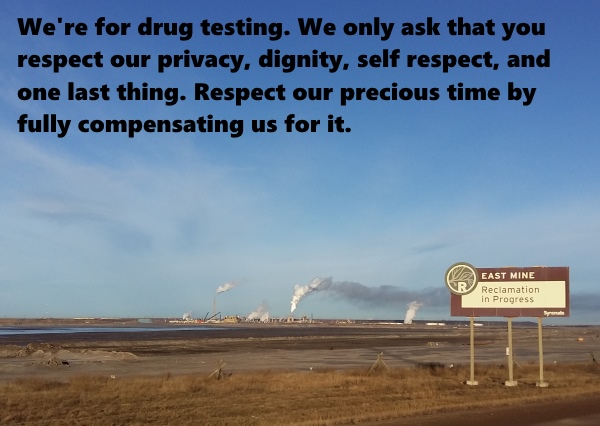 Drug and alcohol testing is fine so long as we’re respected and compensated for our time.

I typically work the busy season (Oct. to Mar.) and always considered myself a seasonal worker. I enjoy the odd drink, but remove it from my lifestyle to focus on work through the winter. I’m always ready and “Fit for duty” if the call comes in the middle of the night, but my views on Drug and Alcohol testing changed about 2 years ago.

After sifting through many government websites and legal proceedings (Many still ongoing), we still have no clearly defined laws on these issues.

There’s a problem that exists in our society. When there’s something wrong, we throw a new law, rule, or regulation at it and enforce it with fines, or other penalties. We rarely teach people how to think anymore. We’re far too busy teaching rules and laws to have time for that. With nearly 5 million laws in Canada, we’ve crossed a threshold. (We’ll be covering this soon in another article.)

OK, so back to why my views changed.

My views didn’t change because I started abusing alcohol or drugs. They didn’t change because I felt we shouldn’t have Drug and Alcohol testing. They changed because companies are abusing workers and exploiting them with the drug and alcohol testing program. I believe in being able to test, but there should be more oversight and professionalism in the way the testing is conducted.

By implementing a few simple changes, this program would be far more successful and employees would be a little less stressed about the process. Companies should guarantee the preservation of dignity, privacy, respect, and adequate compensation, or face penalties themselves.

Yes. I said “Adequate compensation”. You may or may not have considered this before, you may or may not agree with this, but this is a simple request. It’s their requirement and should be their duty to adequately compensate you for your time, wages, travel, meals, or any other expenses. Being fully compensated for your work and time is a show of respect in itself.

Privacy is another issue and the most important aspect of the whole process. Every employee should have their privacy respected allowing them to maintain their dignity.

Every employee should be provided with 2 documents. The first being the D&A policy they signed when they were hired stating they agreed to the policy. The second being a written notification as to “Why” they’re being tested and “Who” is the individual or company requesting the test. They should be required to sign this notification as to whether they agree or not and also be allowed to make comments or statements to be initialed by both parties. It should be clearly stated the employee is to be fully compensated for their time and all expenses.

This should be a standard document requirement to protect both parties. These documents should be kept on file for a specified length of time. They can also be reviewed by the appropriate government departments to ensure a company is not abusing the program.

Who should pay for Drug and Alcohol Testing?

The company or person that requires the test should be the one paying. In the case of an oil company requiring third party carriers be tested, the oil company should be the one to pay. These are guidelines that should be set forth and enforced by federal and provincial labour standards. A small carrier should not be forced to spend thousands of dollars doing a mass random testing at the demands of a large oil company. ( I’ve seen this happen on more than one occasion in the oil and gas industry.)

It’s simple. Keep the testing for the safety of all workers by minimizing the risk of having people under the influence. Do it in a professional way, but compensate the employees adequately. By compensating the employee adequately and forcing the company that requires the test to be done to pay for it, ensures these tests aren’t abused in the way they are. 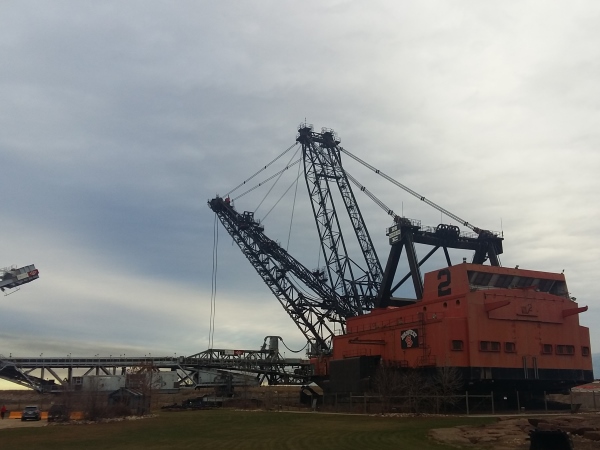 Drug and Alcohol testing is needed in the Oil and Gas industry.

with dangerous equipment and conditions, who wants to work alongside anyone that could be under the influence of drugs or alcohol?

Here’s my personal experience of a random drug test which I felt was unprofessional, abused my rights of privacy and exploited my time without adequate compensation.

I spent the winter of 2014-15 hauling frac sand for a company in Northern Alberta and these are the events that too place one afternoon at the Petro Pass truck stop in Grande Prairie Alberta.

I was off duty and meeting a friend for coffee as he was passing through town. On the way into the truck stop I ran into fellow company drivers who were talking about being drug and alcohol tested. They asked me if I’d been for my test yet and I responded, “No, they never asked me.”. I left them and sat down with my friend who just arrived. I spent an hour or two with him talking before he had to go.

On our way out, our company safety manager confronted me in the doorway with my friend. He asked me what I was doing, then gave me directions to the nearby drug testing place. He said to me, “Go get tested or go home”?

I didn’t feel very good about this. It was rude, threatening and embarrassing in front of a personal friend. He didn’t even offer me a ride there. When I was outside in the parking lot, another driver said the same thing, the safety manager said “Get tested or go home”

Apparently he was directed by the safety manager to “Look after it”, I asked him why they were testing everyone. He told me the safety manager said the oil company we were working for had asked them, “When was the last time you drug tested your employees?”

I can’t describe the look on the face of my friend. He commented on how unprofessional it was as he went on his way.

So they tested everyone for the company that day. This wasn’t random at all.

I did the test and passed, but the way it was conducted gave me a completely different outlook on the way D&A testing is abusing people’s rights.

There was no confidentiality, privacy, reason, or just cause. It made me feel violated, demoralized, embarrassed and threatened. Had I refused, they could have taken my job and my livelihood with no just cause. I have a family, children, and responsibilities as most of us do. I was also given no compensation for my time.

All I’m saying is we need some rules, guidelines, oversight and accountability as to how companies are conducting themselves with Drug and Alcohol testing in this country.

Thanks for reading Drug and Alcohol Testing

Off road trucking in the oil and gas industry can be fun, challenging, and financially rewarding. This section of our Oilfield trucking series is END_OF_DOCUMENT_TOKEN_TO_BE_REPLACED