Truck driving salaries in the oil and gas industry can be very good, but there’s almost always a sacrifice. We’ll get into the pros and cons of oilfield trucking after we entice you into the pay first.

If you’re used to making $40,000 to $70,000 a year as a Canadian over the road driver, you can make double that or more as a driver in the oilfields. Just be prepared to work, sleep very little at times, and answer your phone when you get called out at any time. Drinking, partying, drugs, and an active social life are something you may have to abstain from for long periods of time.


We noted previously the reality of self-discipline for a reason. If self-discipline is not one of your strong suits, you may want to make strict money management plans with a spouse, family member, or investor. If you’re used to clearing $2,000 every two weeks just to cover your bills, what will you do with a $4,000 or even a $6,000 check?

A good driving job in the oilfields can net you $3,000 to $6,000 bi-weekly (after taxes). I know this sounds like a lot, but it’s true. (This is a good range to use for an experienced driver in steady economic times). Even entry level truck driving jobs with service companies can also pay a considerable amount of money. 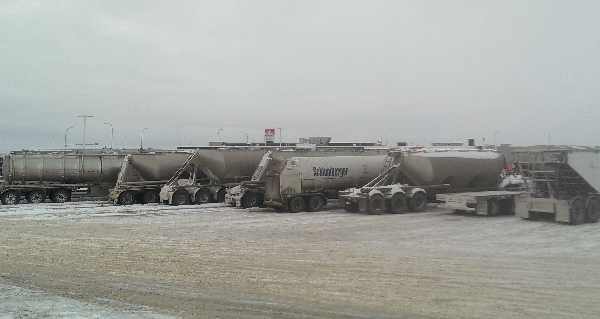 So what’s a good starting hourly wage, and what’s an average truck driver wage in the oilfield?

You can expect to make $28/hr to $32/hr at the lower end of the pay scale. Anything under this would be aiming low considering all the higher paying companies and jobs available. $35/hr to $40/hr is not uncommon for more specialized work requiring more experienced drivers. Keep in mind the pay reflects the economy and will fluctuate with supply and demand.

Truck driving salaries in the oil and gas industry are not the same as highway work and many companies pay overtime. There’s very little overtime paid for highway drivers in Canada. Most pay is by the mile. Overtime is usually after 50 hours a week or 8 to 10 hours per day. You can reach 50 hours in the first 3 or 4 days, so the rest of the week is all paid out at 1.5 times your wage. It adds up pretty quick making $45 or $50 and hour working 12 to 18 hour days.

In 2008 we hit another recession which took its toll on the industry and the truck driving salaries. There was some slow recovery over the next few years, but nothing like it was in the few years before 2008. Then there was the recent crash in 2015. I worked through the winter of 2015 myself and had one of the best winters I have ever had. How did I do this? I opted to work for a very small company that still had a good contract locked in with an oil company.

You may have to make hard decisions on what is the right thing to do and it can be a roll of the dice at times. There are now (April 2016) an estimated 100,000 people in Alberta laid off in the oil and gas industry. These are very hard times. The worst since the crash of 1980, but things will turn around eventually. When they do, where will you be?

The Oil and gas industry experienced a crash in 2015-2016. Tens of thousands of workers unemployed. Worker camps have been shut down in many places and truck driving salaries have taken a hit too.

Off road trucking in the oil and gas industry can be fun, challenging, and financially rewarding. This section of our Oilfield trucking series is END_OF_DOCUMENT_TOKEN_TO_BE_REPLACED