Trucker shortage? Really? Does this mean we get to dictate a little more of our future now? How about demanding higher wages, more respect, or more say in the outcome of rules and regulations that affect us?


As drivers we’ve been listening to this line for about 20 years now and I’m sure most of you are sick of it. 20 years of burning yourselves out working almost twice the average hours of a normal job. Waiting for things to change for the better, but watching the industry progress downhill instead of uphill.

I’m not going to get into the same old stuff that’s been regurgitated 1,000 times. That’s not who we are. I’ve been fortunate in my career to have made a good living working for some great companies, but that doesn’t mean I wasn’t aware of what was going on, or that I didn’t go through a few struggles myself.

We’re going to take a different approach on the truck driver shortage issue. Don’t worry if you don’t agree with anything I say. Just hold your thoughts, and you can have your say at the bottom. That’s why we’re here. We want to hear from you. 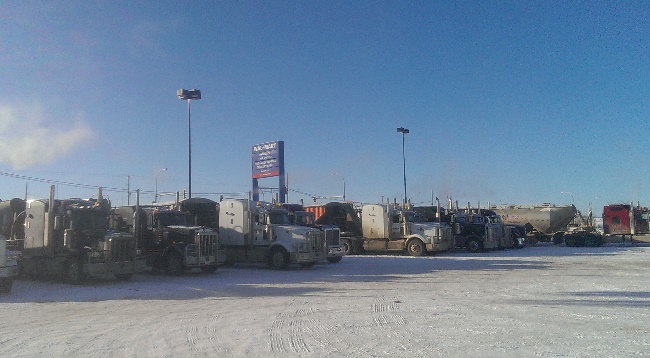 In the past 15 years there’s been a large shift of drivers to the western provinces where Ice Road Trucking, oilfield trucking, and oil sands projects have been enticing drivers with much higher wages than the typical pay per mile. Drivers have the ability to live out of their trucks for months at a time to take advantage of the higher pay.

I’ve read a number of articles regarding the trucker shortage and have come to one conclusion. There isn’t one. Don’t over think it, or try to make it more complicated than it is. The statistics we’ll get into don’t lie. Don’t believe the mainstream media reports either. They’re rarely in touch with the reality of the trucking industry, but they don’t miss an opportunity to make us look like the bad guys when given the chance.

Think of the trucker shortage this way. We have a shortage of truck drivers that are no longer willing to be exploited.

One article from February 25, 2013 in the Halifax Chronicle Herald, Driver shortage leaves trucks sitting idle, is a great example of how out of touch the media is. Economic exploitation is finally catching up to trucking companies that have been playing the numbers game with drivers for many years.

The fact that this industry, or any company can place blame a trucker shortage on an aging driver population is ridiculous. (This is what the media reported.) If you knew something was going to cause you grief in 20 years and did nothing about fixing the problem, you have no one to blame but yourself.

Suffering the consequences of your own (lack of) action is what you deserve. Drivers should have no remorse for a single trucking company in this position. Truckers have covered the industry while missing out on their kids lives and their own for 20 years. They’ve been pushing hard, working hard, dealing with forced dispatching and guilt to get the job done for companies that skimmed them for years.

Many drivers are so sick of the industry they had to get out of it. Some were so run down and burnt out their health wouldn’t allow them to do it any more. The fact that companies used and abused so many hard working men and women is a shame. It’s a slap in the face they’re now being replaced by immigrant drivers willing to work for lower wages.

Many drivers have been tossed aside into the rag pile like a worn out shirt. (It served it’s purpose, but may still come in handy to wipe up some dirt).

This has nothing to do with discrimination in any way. It’s just calling a spade a spade, but unfortunately in this politically correct society we’re no longer allowed to do this. The minute you mention another race, culture, or question immigration policies from the no side, you’re labelled a bigot or racist. As a tax paying citizen, you have every right to question how your money is being spent.

If this isn’t your situation, that’s OK too, but a little bit of empathy may help you understand both sides. Remember we write and it’s our job to strike controversy.

Off road trucking in the oil and gas industry can be fun, challenging, and financially rewarding. This section of our Oilfield trucking series is END_OF_DOCUMENT_TOKEN_TO_BE_REPLACED