Bending the rule is not always a bad thing. Sometimes it’s the only thing to do. Most progress wouldn’t happen if rules weren’t bent.

When I rolled onto the ice for the first time, it was pretty much like a downhill driveway onto another street. There was no thrill, strange noises, or feeling like I might fall through at any time. Almost all my focus was actually on my speed.


The speed limit driving on and off portages was a crawl at 10km/hr. We also had to tighten the gap a little as the spacing between trucks changed from the 1km required on Ingraham Trail to 500 meters (1/2 km) on the ice.

With the strict rules, I felt paranoid like if I screwed up just once, I was gone. This was the way it was the whole season. You could easily find yourself packing if you didn’t follow them. I’m sure I wasn’t the only one that felt a little paranoid.

It wasn’t about wanting to follow the rules as much as it was just knowing you’re human. What if you missed a sign, or didn’t realize you were 3 or 4 over the limit?  This wasn’t the local police that usually have a 5 or 10 over tolerance as I found out the hard way for travelling 3 km over myself.

Bending the rule. Sometimes rules have to be bent. We would never progress as a society if no one bent the rules.

The opposite of no rules is walking on egg shells. This is no way to do a job either. Remember it’s always about balance. Of all the CDL truck driving jobs out there, Oilfields and Ice Roads top of the list for high paying truck driving jobs. Unfortunately, along with these jobs is a safety environment that is borderline on too many rules.

Following the exact rules every step of the way would end up creating dangerous situations for some drivers. Sometimes you just have to “bend the rule” a little bit.

This is one of the areas where they could have improved the initial safety orientation. Most of the spin outs coming off a lake onto a portage were the result of not bending the rules. 10 Km/hr won’t get you up an icy hill. This means the equipment, and your safety may be put in jeopardy.

The enforcement officers actually had to tell people on the radio to speed up or they wouldn’t make it up the hills. They were getting frustrated with the road being shut down each time someone spun out.

Yes there was a posted sign, and yes they were strict about the rules, but sometimes you have to use your head. 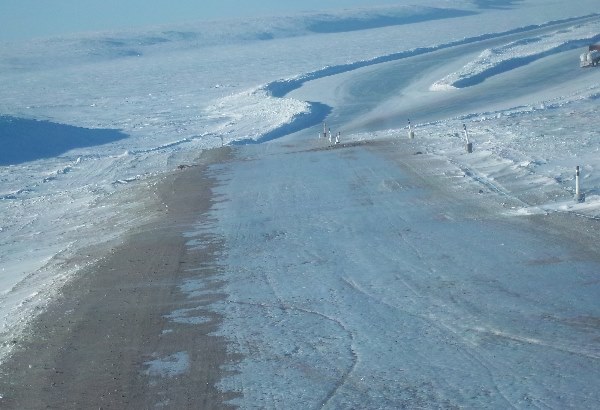 Bending the rule. The rules say 10 Km/hr on and off the lakes with a loaded truck, but would that get you up this hill?

Aristotle refers to “bending the rule” as a way to deal with irregularities of standard rules. The saying comes from his observations of stone masons carving round pillars out of stone. Trying to measure a round column with a straight ruler didn’t work. They had to “Bend the Rule” to measure around the pillar and developed the first flexible ruler in the process. He refers to this as an example of applying practical wisdom.

Thanks for reading Bending the Rule

Off road trucking in the oil and gas industry can be fun, challenging, and financially rewarding. This section of our Oilfield trucking series is END_OF_DOCUMENT_TOKEN_TO_BE_REPLACED