LUCK – Labouring Under Correct Knowledge can be said many different ways, but this one stuck with me as my favourite, partially because it was so easy to remember. An older gentleman explained this to me years ago, but it’s been around for a very long time.

The earliest philosophical look at luck can be traced back over 2,300 years to one of the greatest thinkers of all time. The Greek Philosopher Aristotle believed that luck was a specific form of chance, but unlike chance which can be accidental, luck must involve a choice or deliberation.


What’s the difference between Luck, and Chance? I guess it all depends on the one doing the interpreting. I always considered chance to be something that happens by accident, or a fluke. You’ll never hear a game operator at a casino or fair asking “Do you want to try your chance at a game of luck?”

Ice Road Trucking is like a big game of chance for many of the hard core drivers, hence the reason it’s called the “Dash for cash”. Their goal is the most amount of runs (money) they can get in the two month season. If you wanted to win at the game, you had to try and create a certain amount of your own luck by making the right decisions at the right time.

For me, I even thought luck kept me safe on the road as an off road driver, but you don’t drive incident and accident free because you carry a rabbit’s foot. Don’t mistake this as a cocky statement either. I know anything can happen to anyone at any time, because we’re human after all. Luck is just one thing that can minimize the risk of incidents. 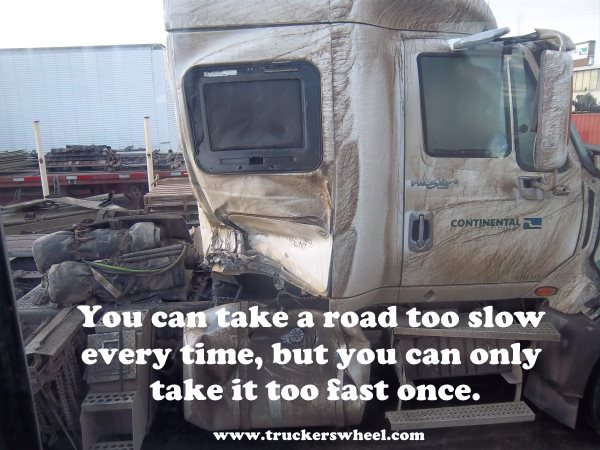 The most valuable lesson in truck driving safety ever offered.

So labouring under correct knowledge had become sort of a theme I used in my life. I used it for a long time, but it wasn’t until I reached my 40’s that I realized something was still missing. After hearing the saying “Luck can only get you so far in life” a few times, it really got me thinking. Luck didn’t make me a professional behind the wheel, or a better person, it only allowed me to minimize my risk of incidents.

My knowledge from experience allowed me to make the right decisions at the right time. So what was I missing? This is pretty good isn’t it? No accidents? Safe driver? The fact was, I wasn’t that safe. There were even times I drove aggressively, selfishly, and lacked patience. I was nothing more than a person with the ability to react quickly to possible dangers based on the predictability I learned from my driving experience. I could make the right decision at the right time, but I didn’t always make those decisions for the right reasons.

Truck driving safety is an attitude not just a skill.

You’ll find out what I was missing when we get to chapter four.

Thanks for reading LUCK – Labouring Under Correct Knowledge

Off road trucking in the oil and gas industry can be fun, challenging, and financially rewarding. This section of our Oilfield trucking series is END_OF_DOCUMENT_TOKEN_TO_BE_REPLACED