Ice road trucking e-book preview 12 takes a look at common sense and how human nature deals with unfamiliar territory. Let’s start it off with another quote that I love.

“Everybody is a genius, but if you judge a fish on its ability to climb a tree, it will live its whole life believing it’s stupid”.

There’d be no watching movies while driving for me on the first trip at least. It was all about getting to know the road, and the drivers I was travelling with. We were still off on another channel chatting about anything and everything as we crossed Gordon Lake.


Lee had plenty of time to fill us in on all the rules and regulations he could think of. As with anything else in life, there are unwritten rules which he was also pretty good at covering.

We had over an hour and a half to talk and having a group of only three drivers made for an easy to follow radio conversation. This changed when we got close to the other end of the lake.

When you have a larger group you end up with more than one person trying to talk at the same time. The sound coming through the speaker is about as unpleasant as nails on a chalkboard. Our conversation about the frustration drivers were going through turned out to be an open invitation for comments from other drivers.

We had some decent people join in the conversation, and a few of the variety that couldn’t tie their own shoelaces. Some comments were just plain ignorant like they were looking to start trouble. If you don’t respond to people like that, they’ll usually just go away. Mark Twain says,

“Don’t argue with stupid people, they will drag you down to their level and beat you with experience.”

There were many times I’d just listen to satellite radio to get away from the negative people on the ice road radio. 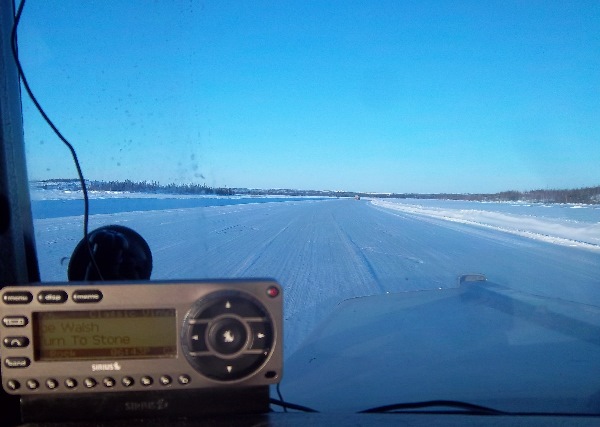 Ice Road Trucking e-book preview 12. Satellite radio was a must have for staying entertained.

Verbal abuse to new drivers continued the whole season. It boils down to that “Dash for Cash” we talked about earlier. That should be changed to “Dash for Cash makes you a selfish ass.” Many of the dash for cash mentality truckers are all for themselves. There was no question that the rookie drivers would cost them time, money, and sleep, but one still needs to have a certain amount of tolerance for the new drivers. After all, we were all new once.

“They won’t last.” “They’ll never make it.” “They aren’t cut out for this work.” I hear this next one quite a bit, “They have no common sense”. Is it really common sense they lack, or common knowledge that comes with industry experience? The fact is, you could watch almost anyone struggle in unfamiliar territory.

I hope you caught the quote that started this section? How intelligent do you think a man as brilliant as Einstein would’ve looked his first trip in a truck up the ice road having no experience? Regardless of how well his first trip would have gone, I’m sure he would have quickly become an expert based on practical wisdom.

If you’re willing to understand this concept, you’ll only become a better person, trainer, leader, and mentor. If not, you are resembled in this next quote by the great Mahatma Ghandi.

“It has always been a mystery to me how men can feel themselves honoured by the humiliation of their fellow beings.”

Ice Road Trucking e-book preview 12. Oversized loads on the ice roads. These tanks are over 35 feet tall and were move hundreds of Km’s over the ice road.

You can also watch some authentic video of these loads moving into Lockhart lake camp just as I was rolling out.

Off road trucking in the oil and gas industry can be fun, challenging, and financially rewarding. This section of our Oilfield trucking series is END_OF_DOCUMENT_TOKEN_TO_BE_REPLACED