Welcome to the last of our previews, Ice Road Trucking e-book preview 13. We hope you’ve enjoyed them. If you’re interested in a complete copy of the book, we’ll be releasing it in its entirety sometime in the summer of 2016.

Ice road trucking e-book preview 13 starts off with pushing your limits, and ends with an actual breakdown on the middle of a frozen lake at 3 am with no one around for miles.

Running out of Steam

I finally arrived at the turn for Lockhart Lake at 10:30 pm on February 23. It took me about 8.5 hours to travel back from Ekati to Lockhart with my first return load of the season. This was about an hour longer than a typical run northbound with a load.


I met a lot of convoys on McKay Lake travelling north including one with 11 trucks. I have no idea how it happened considering convoys were rarely larger than five or six, but having a loaded trailer meant I had to slow to 10 km/hr for each truck I passed.

I had the option of not stopping in Lockhart since southbound loaded trucks could turn and burn like the empty trucks. The thought of not stopping crossed my mind, but 8.5 hours was long enough to go without a break. The temperature was -32 and dropping so I rushed inside thinking I’d grab a coffee and a quick snack to go. I saw a few friends finishing late meals, so I ended up sitting down to chat. I killed about 1/2 hr, but the social time was nice after travelling by myself for so long.

Stopping too long in Lockhart left me with the decision of travelling all night, or climbing in the sleeper? Staying at Lockhart meant breakfast and coffee in the morning, but driving through the night meant less traffic to slow me down. I also knew there was a scheduled road shutdown on Ingraham Trail between 12 am and 3 am that would make traffic even lighter. Tim, Brian, Junior and a couple of others were coming up with some 27 foot wide loads that night. 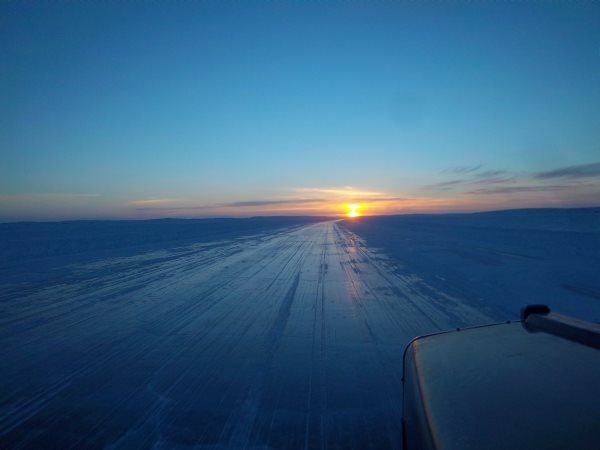 I was only moderately tired and had a little left in me, so I headed out by myself around 11:30. I figured I’d meet the oversize loads about 4 am somewhere around Gordon Lake. My goal was to make it down to the Meadows by morning. I could reassess that goal at the designated pull outs at the Sugar Shack, and again at Portage 16 if I felt I wouldn’t make it.

I met a few convoys from Lockhart to Drybones, but almost nothing from there to Gordon Lake. I counted only six trucks in 2.5 hours, with the last one being the security truck parked on Portage 25. He told me I was one of the only southbound vehicles on the road below Lockhart. He also verified my road number so he could call security on the lower end to inform them of my progress. They weren’t just there to enforce rules, they were there for our safety too.

By the time I reached the Sugar Shack I started running out of steam. I realized I wouldn’t make it to the Meadows, but I had to make it across Gordon. I didn’t want to hit it in the day and have the same gruelling experience I had crossing McKay Lake earlier in the trip. I was about 2 1/4 hrs to the pullout on portage 16 so I kept going. It was a beautiful clear night to enjoy the northern lights that were dancing across the sky, and the usual sounds of occasional static and radio chatter had been replaced with silence. I would have over 1.5 hours of relaxing time while I drove across Gordon Lake, or so I thought.

It was 3 am when I first realized that the steam was running out of me. (Literally). You know when you have a coolant leak because it has a very distinct sweet odour. I caught a few whiffs of it as I was driving, so all my senses were now on alert and survival mode kicked in. I was only about 15 kms across Gordon with 25 more to go.

This was one of the only times over the whole season I was on my own like this with nobody around. It was the worst possible timing. Its 3 am, I’m in the middle of a 40 km long lake, and I’m the only vehicle on it. (It doesn’t even sound good). I’m not one for sensationalizing as you already know, but there was a slight touch of fear that struck me. If I was starting to get a little tired before, I was wide awake now….

Off road trucking in the oil and gas industry can be fun, challenging, and financially rewarding. This section of our Oilfield trucking series is END_OF_DOCUMENT_TOKEN_TO_BE_REPLACED